San Francisco, a name that carries on like legend across the world. But, what keeps the city running, the prices growing, the population ever escalating, and business being more lucrative than ever? With a bit of research, it becomes evident, that the drivers of the economy in the area are agriculture, tourism, technology, education, seaports and pro sports! Indeed, some of the most lucrative industries around! Also, those with some of the highest risk of being hit by crime. Here’s what we mean. 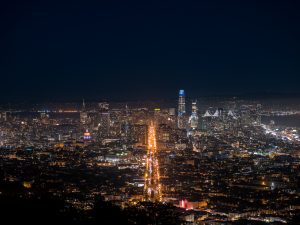 Most of all the industries mentioned above involve not only peaking cash flow, but also, by virtue of their services, a notably higher element of public engagement. In tourism, we see the epitome of potential crime risk. Thousands, if not millions of people constantly surging through the city and surrounding areas, daily.

Educational institutions, with recent media focus on school violence, shootings and the like, are also some of the most endangered by the prospect of criminal attack. Seaports – constant exchange of highly valuable goods – everything comes in and goes out from the ports – you make the deduction. Sports? Rowdy fans, loss of inhibition, upheaval and major hormonal exchange, all lead to a critical need for tight and trained security. To top things off, San Francisco, sadly, is also plagued by a substantial homeless and impoverished population, which gives rise to an even higher risk for businesses and their patrons.

Yes, indeed security is one of the most imperative aspects of any business involved in the industries mentioned, and certainly in others, which didn’t make the list. This is why progressive security firms are being employed by a huge number of institutions, organizations and private companies in the San Francisco Area. Covering all your bases is an absolute necessity when seeking to uphold a standard for your patrons and for the business as a whole, and thanks to the evolving knowledge base and the level of training employed by professional security firms, the risk can be substantially lessened, if not eliminated completely.