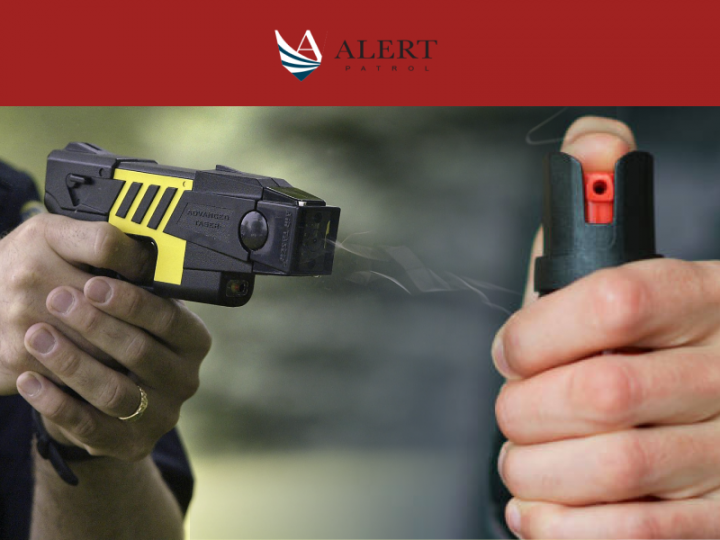 The stun gun vs pepper spray debate is a productive one for you. It gives you a better understanding of the security options you have to defend yourself. Before we go any further, let’s define what they are.

When you take chili peppers, you feel their characteristic heat. That’s capsaicin – the active ingredient in pepper spray. It is an aerosol like any other spray, useful for self-protection.

A stun gun is utilized to deliver an electric shock. It has electrified pongs that get active whenever it’s turned on. The electric shock occurs on contact. It is different from a taser, as it does not have any probes or darts that shoot out. Therefore, one has to apply the shock themselves by getting close to the target.

Stun guns are generally more expensive than pepper sprays. Stun guns only need recharging, but with pepper sprays, you will refill or replace cartridges when they get depleted.
A pepper spray’s average price is about $6 to $50, depending on the size. A stun gun costs about $50 and can be significantly higher for larger and more professional ones. For example, a security guard patrol may need to use a bigger one.

The stun gun vs pepper spray debate becomes more apparent when you understand how they work. Pepper sprays have varying ranges depending on their specifications. The longer the range, the better. It makes it more efficient to use in self-protection scenarios.
In an instance where you find an intruder in your house, you can use your pepper spray from a distance to scare them away. You can acquire a bear spray, which can reach a significant distance of up to 35 feet.

A stun gun works differently as you have to get the target within touching distance. Usually, stun guns are mistaken for tasers. With a stun gun, you don’t shoot out anything, and you need to apply the shock when you are closer to the target.

Stun guns and pepper sprays are typically easier to stop. Statistics show that the attempts are about 90% successful. Pepper sprays may not be effective in windy conditions as the aim won’t be accurate. The content ends up falling elsewhere, rendering it useless.

The success rate of a stun gun is highly unpredictable. In self-defense scenarios, you do not know what you are going up against. For example, the threat can be significantly bigger or stronger than you and will end up pushing your hand away before you get the stun gun on them.
The situation might end up endangering you more. Women especially have difficulty with stun guns as they are generally not more muscular than most men.

Size is a critical factor when deciding what to carry around and its effectiveness. Nobody wants to carry around something that weighs down on them.
Personal stun guns and pepper sprays are significantly small. Pepper sprays are typically lighter than stun guns. However, they both do not weigh much, and they can be about 2 ounces—the weight increases with size. In the weight criterion, both of them win.

When shopping for a pepper spray or stun gun, aim for the smallest ones. It will make it easier for you to carry around without thinking about how you’ll hide them. You do not want to be walking about with, for example, a pepper spray bulging out of your pockets.

A pepper spray hardly intimidates anyone. An assailant is more likely to respond to a stun gun than pepper spray. It is a helpful protection tool only when used to good effect. Its sight can be laughable, as it might look like regular spray.
A stun gun is way better. It produces a charging sound, and its appearance makes it look like a highly sophisticated weapon. It also delivers with significant effect, and it will be easier for you to subdue a threat.

You can easily disguise both pepper sprays and stun guns. They fit your pocket, most types of bags, or an accessible compartment, for example, in your car. You can catch an assailant off guard and deliver to a good effect.

The above guide gives you the primary points of argument to decide whether you want to use a stun gun or pepper spray. Both are effective in different ways. With pepper spray, you do not need to be close to a threat to deliver. There are pepper spray variants that allow you to launch the aerosol from as far as 35 feet.

You need to be within touching distance of a threat to use a stun gun. A suitable option would be a taser, but it is not part of today’s stun gun vs pepper spray debate. A stun gun delivers with more effect. However, it is a risk as it might expose you to a physical altercation with the assailant.

Alert Patrol is a company that offers exceptional security services. The institution is committed to assisting law enforcement in implementing security services by protecting our customers from criminal activity. If you choose to hire us, you get a wide range of services from unarmed to armed security guards for your business or home. For example, if you need private party security, we are ready to chip in.