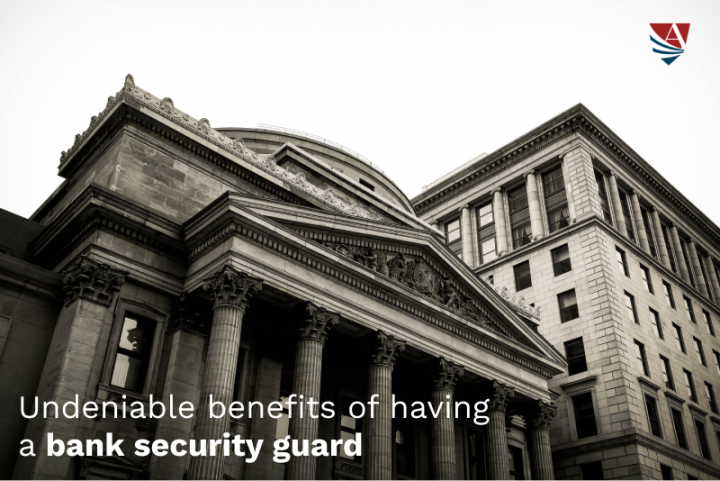 For financial institutions, security is not an option to be considered – it is the pillar of the business. A single robbery can ruin a bank’s business and reputation, and we are not only talking about the money. Even if failed, a robbery can put people at severe risk. Employees and customers may end up injured or even killed. Banks both hold significant money assets and are open to the public, making them a lucrative target for criminals and an easily accessible one if adequate measures are not taken. Therefore, reliable security is a necessity. Bank security guards are the first line of defense, so experts from security guard patrol highly advise you to hire them.

If you are wondering whether you need security guards, think of everything that could go wrong without them. The bank’s money, employees, customers, ATMs, or even offices are highly vulnerable without protection. You don’t even have to think about the worst-case scenario, as even minor incidents can be highly dangerous or at least highly stressful. In addition to that, office security should never be underestimated. So, let’s lay out some of the contributions that security guards provide to a financial institution.

Whether you are located in a high-risk area or have already had security breaches, taking extra measures is always beneficial. Even if you are located in a low-risk area that hasn’t had a history of robberies or similar incidents, that doesn’t mean that the first bank robbery isn’t possible to happen soon. Prevention is the key. Taking chances is always the most expensive option. That’s why security guards are always alert. They are trained to identify any suspicious behavior and prepared to act quickly and adequately.

Not only do they prevent extreme scenarios, but security guards are also authority figures on the premises. Due to the nature of financial businesses, hostile customers are a possible occurrence. They may think that they have been wronged, overreact to what they perceive as a lack of customer care, or possibly even be provocateurs that cause incidents on purpose in order to discredit a bank. Even if nobody ends up harmed, such incidents are highly unpleasant and stressful for bank employees and customers. The presence of guards discourages such behavior; even if it happens, bank security guards know how to de-escalate it adequately.

Thieves frequently target ATMs as they are considered sources of ”easy money”. They are located outside of buildings, which gives the thief a quick escape route, in addition to being accessible after hours with no employees around. However, ATMs hold large amounts of money, and the losses due to a robbery can be immense. Even if the thief fails to reach the money, repairing the damage caused by vandalism can cost thousands of dollars per incident. Also, thieves may ambush customers and force them to withdraw large sums of money under the threat of violence.

That not only puts customers in extreme danger but also discourages them from using the ATM. But if security guards are around, they can keep the ATM under surveillance during both the open hours and after hours. They will deter thieves from trying to break into the ATM and also protect customers while they do their transactions.

Parking lots are weak spots and frequent crime scenes. Criminals can easily blend in and enter the parking lot unnoticed, as well as easily run away after attempting or committing a crime. As with ATMs, they can easily ambush customers as they leave the bank and get into their cars. Such incidents can end up with terrible casualties. Also, if left unmonitored, parked cars are easy targets for burglars. That’s why having a security guard to patrol the parking lot is vitally important. They will double-check every vehicle entering and leaving and stay alert for everything that happens on the lot.

Lastly, bank security guards provide customers with a general sense of safety. They greet them at the entrance and even guide and inform them if needed. They are the first people customers see when entering the bank, getting a good first impression that they have come to a safe and orderly place, where they can have their businesses done without risk. That way, customers will start holding your bank in higher regard and appreciating your efforts to keep them safe and convenient. Peace of mind has no price, and security guards will give it to everyone in the bank, from the owner to the customers.

That generally varies from bank to bank and from place to place, but most of the time, they do. Financial institutions are at a high risk of crime; understandably so, having an armed security guard is the preferred option. If the situation requires it, they are trained to react quickly and adequately to what might be a lethal threat. Armed guards are licensed to carry guns and trained to use them. Also, the very sight of armed personnel is, most of the time, enough to deter criminals. Very few will still attempt to commit a crime when they have been clearly shown that doing so may have lethal consequences.

Banks, by nature of the business, are highly attractive to criminals. They hold significant money assets and serve a large number of customers, which puts them at high risk without proper security measures. For that reason, having bank security guards is of vital importance. They fulfill various duties to keep the bank and its customers safe, and are always alert and trained to quickly identify suspicious behavior and respond adequately, even in extreme situations. Not only do they prevent robberies, which can be life-threatening, but also maintain general order on the premises and deal with hostile customers, de-escalating any unpleasant and stressful situations. They greet and host your customers, who will appreciate your efforts for their safety. By hiring security guards, you and your employees will have peace of mind and be able to entirely focus on providing your customers with the best possible experience.